All You Need to Know About VoIP

VoIP stands for Voice over Internet Protocol, which is a type of phone service that operates over the internet. It allows you to make calls, without the need of a telephone network. Instead, you need to have an internet connection to communicate via VoIP.

Most people prefer using VoIP over traditional analog phone service because of the fact that it is a way cheaper option and allows people to save their hard-earned money.

How Does VoIP Work?

There are two types of signals, analog and digital. Analog signals are those which are continuous with time i.e. their amplitude varies continuously with time. On the other hand, the amplitude of discrete signals swings between two fixed levels that are 0 (low) and 1 (high). A digital signal comprises of a combination of 0s and 1s.

Voice signals are classified as analog signals because it varies continuously with time. If we connect a microphone to an oscilloscope and check how our voice signal looks like, we will find a type of sinusoidal curve which is continuous and has numerous amplitude levels. When we talk on the phone, the microphone detects our voice as an analog signal and then the telephone system either converts it into a digital signal or processes it as it is.

VoIP does not need the traditional circuit-switched PSTN network, rather it is based over the internet and hence, requires less resources. Some people believe VoIP is a means of making free voice calls, since you don’t have to pay the hefty charges your local telephone company would ask you for, which makes VoIP so cheap that it almost looks like it’s a free service.

How Can You Make a VoIP Call?

There are two ways you can make a VoIP call.

Another way of using VoIP service is to use an IP phone which is a user-equipment specially designed for making phone calls over the internet. It has an in-built analog-to-digital converter, which directly connects to your router via a RJ-45 ethernet cable. Traditional analog handsets use an RJ-11 connector instead of the RJ-45 ethernet cable. The description might make you think that IP phones look different than the traditional analog phones, but that’s not true. They look exactly the same on the outside but definitely have different internal circuitry.

Some people don’t like the idea of using handheld phone because it requires them to hold the phone with one hand for a long period of time, which might make them feel tired or make them feel a bit outdated. If you’re one of the people who don’t feel comfortable in using a handheld telephone, instead you want to stick to something that’s modern and handsfree, then there’s good news for you. There are a couple of software which allow you to make VoIP calls through your computer. All you need is a stable internet connection, a microphone, and a speaker or a set of headphones to make the call. With this method, you don’t have to worry about paying huge sums of money every month in the name of telephone bills. VoIP calls will cost you very less as compared to your local telephone connection, no matter which part of the world you’re trying to reach.

How Is VoIP Different from Analog Telephones?

Let’s see how VoIP is different from analog telephones. First, let’s talk about the way signals travel in each of these calling services. Analog telephones send their signals over copper wires, which need to be rented, hence cost more as compared to VoIP. As mentioned earlier, VoIP sends its signals in the form of packets, which does not require special infrastructure; hence it costs low.

A typical landline service provider will ask you for 50-100 dollars per month for a single line rental, whereas for a VoIP connection you’d need to pay around $25 per month, which is very cheap as compared to the traditional phone service. Therefore, most businesses prefer VoIP over analog telephones since it helps them save money that they would have otherwise invested in renting telephone lines.

If we talk about the features, VoIP offers much more features aside calling over the internet. As mentioned earlier, you can reject & redirect calls, and also enjoy the feature of conference calling via a VoIP connection. These features are not available in the traditional analog telephone system. They are a mere way of sending and receiving calls.

A great feature that makes VoIP much better than analog phones is voicemail transcription. It is a service that allows you to convert your audio voicemail into text through a specialized software. The converted voicemail messages are then sent as text to your email address with the caller’s details such as their name and number, and the exact time of call. You can then read the voicemail whenever you get time.

Another advantage of using VoIP instead of analog phones is location flexibility. With the traditional landline phone, it was impossible for you to travel and take the phone along with you. Same is the case for businesses. Many companies could not expand their business due to location constraints. VoIP is a savior for such companies since it has the benefit of relocating anywhere, anytime. All you need is a stable internet connection and you can setup your VoIP system very easily.

Moreover, adding or removing lines in a VoIP system is much easier as compared to the traditional analog phone where you need to rent out another line and install the required hardware, by calling a technician. Doing the same with a VoIP connection is much easier and you don’t even need a technician for it.

If we talk about the developments in technology, IP telephony is evolving day by day, leaving the traditional phones way behind in the race. Majority of the people are parting ways with their analog phone connections and moving towards VoIP because of its numerous benefits. In the near future, traditional phones would surely become obsolete and everyone will shift towards VoIP for making calls without breaking the bank and staying connected with the world.

What Is On-Site PBX?

PBX (Private Branch Exchange) is a type of phone system which is used inside organizations and companies as their personal telephone network. The employees of the organization can make calls within their premises and also communicate with the outside world through PSTN (Public Switched Telephone Network).

Through a PBX, a company can install as many telephones as they like within their premises, without the need of worrying about extra charges. On the contrary, if PBX was not an option, they would have to install separate trunk lines for every telephone that they need inside the organization, which would increase the installation cost.

PBX can handle different types of calls including analog, digital, VoIP, and SIP, and also has the ability to convert these calls into PSTN format, when communicating with the outside world.

On-site PBX is better than analog phone systems because of the fact that they are cheaper and do not require technicians or engineers when adding or removing a new line.

If we talk about the cost, VoIP is much cheaper than PBX because it does not need physical wiring for installation. All it needs is a stable internet connection and an IP phone. New connections are easy to make with VoIP as compared to PBX.

With a PBX connection, you won’t be able to enjoy HD voice calling since it is based on copper wires. When signals travel through a copper wire, they are opposed with external as well as internal noise. Electrons present in copper wires generate an intrinsic noise which affects the quality of your call and degrades the voice signals sent over it. This affects the caller’s experience and may lead you towards losing sales. VoIP offers noise-free, crystal-clear calling experience where you simply do not have to worry about the quality of your audio. HD voice calling is the best solution when it comes to dealing with noise and voice quality degradation.

Is VoIP a Good Choice?

Certainly, yes! VoIP is the best choice when it comes to choosing a telephone option to meet your calling needs. IP telephony is the way of the future, and after some years you will notice a prominent decline in the use of traditional analog phones and on-site PBX systems. This is because of the countless advantages and cost-effectiveness that VoIP offers over the other two options.

If you are planning to install a telephone system in your organization, then you should surely opt for VoIP. People around you might tell you not to go for it because not many people use this system but as the world is moving towards digitalization, you will give yourself a pat on the back when you realize how beneficial it is.

Ten years down the lane, almost everyone will shift towards VoIP, hence taking this step right now would be an intelligent move because later on, it might cost you a bit more because of the huge increase in its demand. Voice over IP systems are definitely a good choice and you should go ahead and install one in your organization.

We provide the best VoIP solutions for small and medium businesses. If you think it’s time for your business to shift towards VoIP, then please don’t hesitate to contact us. We have a proven track record of providing VoIP solutions for many companies, and our clients have always loved our service.

Make sure you have received Bria login credentials from the administrator. We recommend you use a headset […] 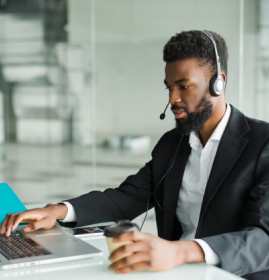 All You Need to Know About the Features of VoIP

More detailed
Your choice regarding cookies on this site. We use cookies and anonymous analytics to optimize site functionality to give you the best possible experience on our site. For more information see Our privacy policy
Tell us how we can contact you:
Tell us how we can contact you:
Leave your details so that we can prepare presentation for You:
Request has been sent

Thank you for contacting us. In the near future our specialist will contact you.

Request has been sent